Philbotomy is Suburbia Roller Derby’s Head Referee, but he doesn’t just help us learn (and follow!) the rules; you may see him officiating a bout near you, because Phil helps out other leagues, too. Not only does he put in a ton of time for the league on and off skates, but sometimes he also brings us homemade breads and pastries. Learn more about Philbotomy below:

Who are you?
I am New York born and bred. I am the youngest of 3, with my “big brother” being 15 minutes older (yes, we’re twins).

How long have you been involved with roller derby?
Since June 2011, so almost 6 years.

When did you join SRD?
November 2012, though technically, I was a member of the Fresh Meat class of 2013.

Why did you start officiating?
I started in roller derby as an EMT for the bouts. At the end of the summer portion of the 2012 season, Leggy Fleming and Satan’s Cheerleader recruited as many people as they could to join them for the last open skating session of the season at the E.J. Murray Skating Center before they started to make ice for the winter. I told them that I had never been on roller skates, and they assured me that they would help me learn. True to their word, at least one of them was with me all night to teach me the basics of roller skating, keep me from falling on my butt too often, and generally ensure that I was not a wall-hugger most of the night. At the end of the session, we all went out for ice cream. While consuming that sweet, frozen goodness, they casually suggested that I was going to attend tryouts in November to become a referee. I reminded them of my fawn-like performance that evening, with all extremities headed in different directions. They assured that I would be fine, and that I had a couple of months to practice. (Well, I could use the exercise …) So, I bought some skates and practiced as well as I could in my basement and on the lunar landscape street in front of my house. By November, I still had nothing the resembled skill on skates. However, various people messaged me from time to time to encourage me to tryout. So, I went, mainly so that they would see how bad I was. I failed spectacularly at many of the skills. Yet, I felt pretty good about myself when I went home. To my surprise, I was invited to be a member of the fresh meat class of 2013. I guess you’d have to say that I am an accidental official, since I never set that as a goal. 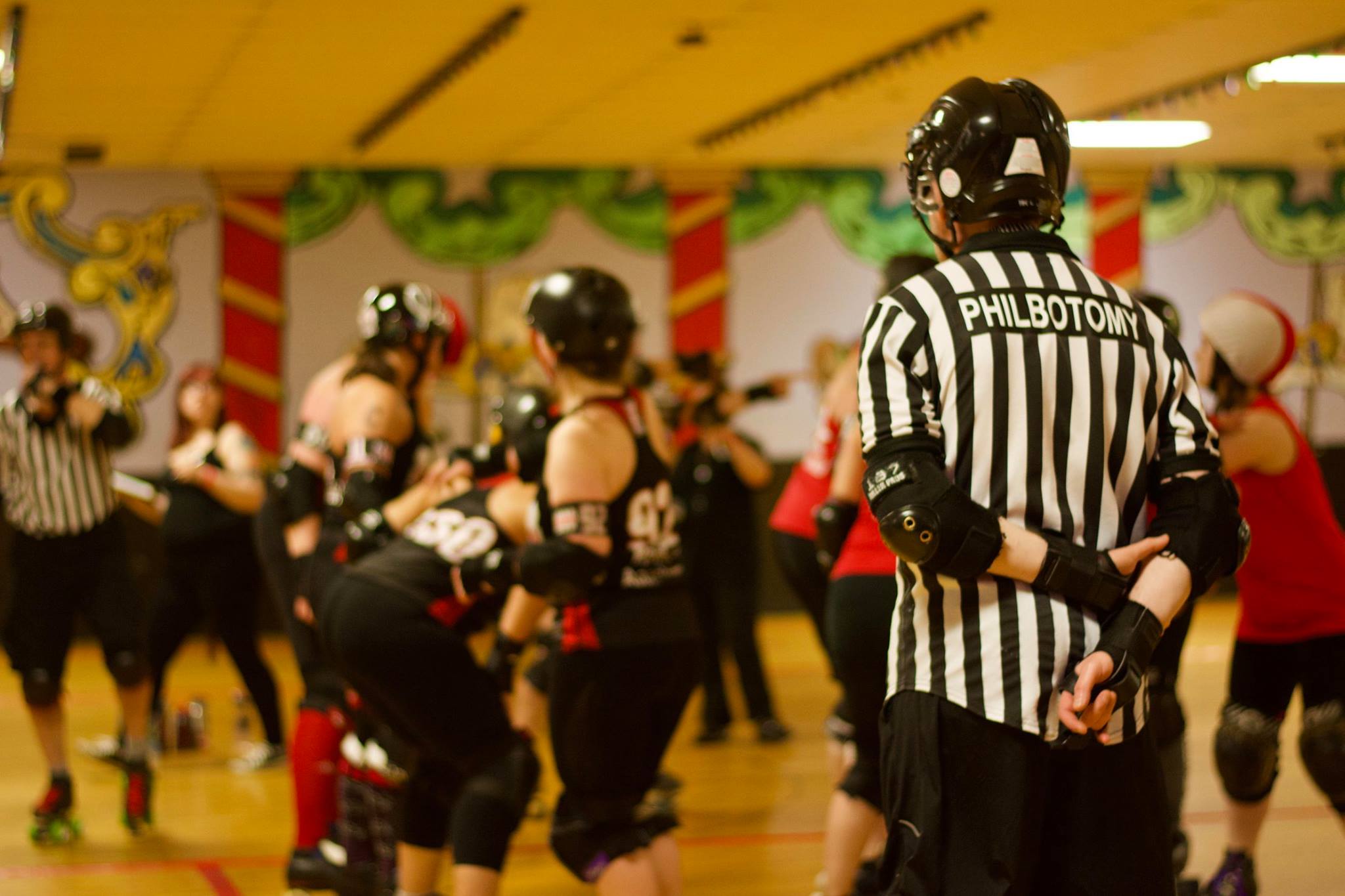 Why do you keep officiating?
Somebody has to keep you guys in line! Actually, it’s because of my derby families. Suburbia is one of my derby families, and there is my Officials family that includes people from all of the area leagues, the 8 other leagues within about an hours drive. Also, as I get better at it, I feel that I can help the league by helping them know what will land them in the penalty box, so they can avoid that, and also help the skaters understand how they can use the rules to their advantage.

When I started as Fresh Meat, I say without exaggeration that I was the rawest member of the class. I was on my butt more often than I was on my skates , or so it felt. I could stop only by falling, or crashing into something or someone. So, it was a pretty big deal for me the day that another Fresh Meat Ref asked me to show them how to do a 180°-toe-stop. There was actually something that someone thought I could do well enough that they wanted me to teach them.

What do you do outside of derby?
I earn my living as an electrical engineer. I both volunteer and work part time as a paramedic. I am a certified SCUBA diver at the Divemaster level.

What are you hoping to do this season?
We are working on a training program for our officials that will launch in May. My goal is to have one of, if not the largest team of well trained officials in the northeast. If I can find the time, and if the WFTDA reactivates the program, I would like to achieve certification as a skating official.