June’s Member of the Month is bench manager Tricky Dick, and this one is a little bittersweet. After nearly ten years with SRD, Tricky is retiring. If you’ve been to one of our bouts, you’ve probably seen Tricky managing the team in his trademark mermaid-scale leggings. And if you’ve ever been a member of Suburbia, you already know what his closing words of wisdom are going to be. Get to know Tricky a little better below:

How long have you been involved with roller derby?
10-10-10 is listed as my official registration date with Suburbia, so if you count the tail end of 2010, this would be my tenth season.

Why did you get involved with roller derby?
I went to grad school in Westchester with Harlot Bronte, who skated with Mad Rollin’ Dolls in Madison, Wisconsin. She volunteered at Derby in the Burbs, the 2010 East Region Tournament hosted by Suburbia, and invited me along. I sat trackside and watched Philly and Steel City and Boston and Providence and Gotham, and I was hooked. She mentioned she wanted to transfer, that tryouts were in a week, and that SRD was looking for skating officials. She retired after a year or so; I stuck around for a decade…

What kept you involved with roller derby? What will you miss most about derby, or SRD in particular?
The answer is the same for both – the people. 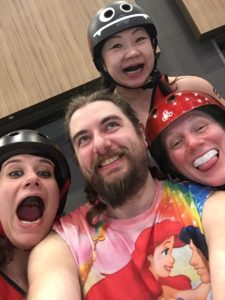 Derby has taken me all over the world – 15 states and 4 countries (so far), and the best times are seeing familiar faces in faraway places – I walked into a venue in Manchester, England, not expecting to know anyone there, and ran into a former Suburbia skater that I hadn’t seen in years (Shady!).

I’ve been around when Suburbia was ranked 54 in the world and when it was ranked 338 – either way, I’d be hard-pressed to tell you what happened in any of those bouts. But I could tell you all about the weddings, the vacations, the after parties, the carpools. The ride is made memorable by the people, not the bouts. That’s what I will always remember, and what I will miss the most.

I’m also going to miss being called Tricky – it had become such a deep part of who I am – at one point it was even printed on my business cards at work. Going back to being called my birth name, after 9 years, is just… weird. It’s almost like a regression, going back to the person I was, and I don’t know how I feel about that. 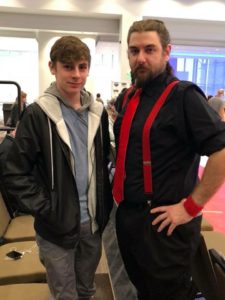 What’s your proudest derby moment?
That’s a tough one: the two times I was voted Prom Queen at Derby Prom? The time Uzi’s girlfriend proposed to her at halftime? Skating with Estro Jen in Rhode Island?

But I think my proudest moment was last year, when my sister and nephew came to an away bout in Albany. I grew up in Albany, and hadn’t really been back in over a decade. I had been skating and coaching for years, and it was the first time any of my family had seen roller derby. A bunch of old high school friends came out to cheer us on, and the after party was in the neighborhood I grew up in. So in a way, it was like a union of the two halves of my life. And I had a killer Little Mermaid outfit that bout…

What do you do outside of derby?
It’s odd – right about the same time Harlot went back to Madison, to camp out in the woods to finish writing a book, I moved Upstate, to a secluded commune in the mountains, to start a book of my own.

Which sounds ridiculous, but it’s fitting, because it had to take something that ridiculous to pull me away from Suburbia.

Any final wisdom to impart?
Skate it out.

Seriously – you all think I’m joking. When things get rough, try it…